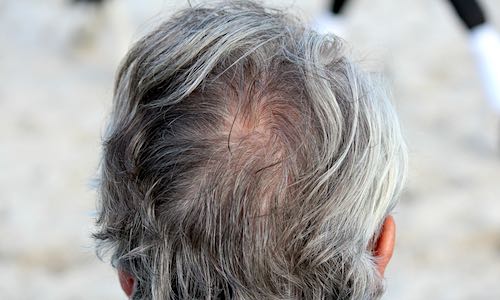 A Hair-Loss Cure That Doesn’t Mess With Hormones:

So in the process of trying to improve yourself, you run into several challenges.

Change your diet, your exercise, maybe even vitamins & supplements.

But what about your Appearance?

As we said before, healthy-faces actually Do indicate good overall health,

So, What if you could heal yourself from the outside-in? -Starting with your hair.

Well that’s what a team from Johns-Hopkins set out to find, and the potentially far-reaching results might surprise you…

Outward Apperance Is Judged Too Harshly:
We all know that Aging has unfortunate-signs and that you’re only as old as you feel.

Well what if you’ve made all those changes and you’re feeling better, but your appearance isn’t catching-up as fast as you’d like?

The JHU researchers started by testing a drug that reverses baldness.

But they also found-out that it reverses gray-hair, skin-damage, external signs of skin-aging,

And possibly more! Read on to find out how…


Problems On The Outside Start On The Inside:
So to prove the idea that the average Western Diet isn’t great, researchers fed mice the healthiest chow they could find.

They then switched-over to a plan that had about the same formula as a standard Western Diet,

And the results were very telling.

-Now to be fair, the mice were engineered to get hardening of the arteries and cardiovascular-disease just like humans,


The Western Diet Kicks Everyone’s Butt, Even Specimen-Grade Lab Animals:
BUT it was the diet-switch that really made the difference.

And it was almost immediately apparent in their Appearance.

They went from normal to sickly-looking in just 8 Weeks.

Just like many of us, they got gray hair, their hair then fell-out,

And then they got all kinds of skin-irritations and sores.

And Now Comes The Magic Drug That Reverses Hair-Loss And More:

Then the researchers did something interesting and gave them a special drug.

You see, after they noticed all these changes in the appearance of the poor mice,

Researchers also found the only change that was made, their diet, caused them to make very strange chemicals,

In their Skin! (+they’re called GSLs)

This was also made plain under a microscope by the increasing-presence of a type of white blood-cell specifically-related to it.

But the magic drug does something really cool by blocking the formation of those GSLs.

-And beauty may not be just skin-deep, because they also form part of cell-membranes too, which are everywhere in your body.


Problems On The Outside Start On The Inside:
Once the special drug started blocking the toxic GSLs, all of the problems the mice had started reversing.

Their skin stopped being aggravated, and healed-up.

They somehow overcame baldness, and grew their freaking hair back!

And to top it all off, their hair went from gray right back to their natural color,

All without Nice ‘n’ Easy 2.5 Soft Black by Clairol.

The only thing I’ve heard about that comes close is using Rogaine forever and donating blood as often as possible.

So we don’t know anything about the Cardiovascular health of the mice,

Or whether it changed at-all as a result of the treatment.

So far, the changes appear to be only at the surface-level.

But again as we stated before, GSLs can be in all kinds of cell-membranes.

So perhaps, they are implicated in more than one aspect of aging that is not just skin-deep.

If Zombie-Cells are implicated in at least gray-hair as many suggest, then maybe an even more profound improvement in health really is going on.


Get Your Girlfriend To Drop That Fancy Moisturizer & Try This:
One of the interesting things that happened during the tests,

Is that the by-products of the Western Diet the mice ate, impeded the formation of good skin-components called Type 1&2 Ceramides.

And also made Ceramide Type 3 much more plentiful, resulting in lots more of the inflammation that Type 3 is known-for.

Just FYI among other things, Ceramides 1&2 help give skin its elasticity and moisture.

As you imagine, administration of the experimental drug reversed this imbalance, and brought it right back to normal.

So the real solution for good skin, is to heal yourself from the Inside and not just to use fancy moisturizer with compounds that may never make it into your face anyway.


Outside Vs. Inside, Another Potential Zombie-Cell Cleaner:
One of the other recent entries we’ve done was on the power of certain drugs and special enzymes to remove what Science calls “Zombie Cells” from your body,

Well, what if this new substance does similar things, just in an opposite way?

What if some cells become damaged or start behaving strangely -Everywhere- because of the mostly-crappy Western Diet,

And this new stuff can help +/- Repair them as much as possible?

So then, you have fewer malfunctioning-cells sitting around throwing out crappy chemicals,

And as many of them as possible are back to normal?


Outside Vs. Inside, What About A One-Two Punch?:
-Or some combination of the two?

What if you take the new stuff (called DPDMP),

And THEN you take the new Zombie-Cell cleaner.

Then you’ve REALLY got the fountain of youth!

You look good, feel-good, and you also ARE good!

From the outside-in, and vice-versa.

The same research team has some prior evidence this might be true.


So For Prevention, Here Are The Worst Things The Mice Ate:
And if you were wondering the exact mix of what made these poor mice develop so many problems.

Well here are the main-offenders.


Maybe That Diet Affects You The Same Way:
So if you are consuming anywhere near, or above those amounts in your diet, you may one-day end up with some of the same problems as these mice.

It’s also important to note that the JHU researchers wrote-down the health-effects to saturated-fat and cholesterol consumption ONLY.

They made no mention of the possible-effects of all the Carbohydrates & Sugars the mice were getting.

That, and their failure to compare the Weight and Bodyfat % of Western Diet fed mice to the standard ones were glaring omissions in the study.

But You can change that possible-future by getting as much Saturated-Fat and Sugar out of your diet, and replacing it with good stuff like healthy meat & produce.


For The Detail-Oriented, The Rest Of Their Western Diet:
Just so you know, the rest of it contained:


The Future Looks Bright, So Put On Your Shades:
Either way, the results are amazing.

The DPDMP drug shows that not only can we fix ourselves from the inside, but we can do it one new way from the Outside, too.

-Especially since baldness, hair-color, and skin-condition can make a big difference in how you feel about your appearance.

There is even a tiny speculative chance that with all that inflammation removed from the skin, even the rates of skin-cancer might be reduced, but we’ll see.

The reduction in topicals, or strange hormone-disruptors like Propecia that you take forever would be worth the price of admission alone.

But here’s to hoping DPDMP can help repair more than just baldness, thinning, or gray hair; the overall-effect might be just as amazing as a Zombie-Cell cleaner!